Spanner is a relational database with 99.999% availability which is roughly 5 mins a year. Spanner is a distributed system and can span multiple machines, multiple datacenters (and even geographical regions when configured). It splits the records automatically among its replicas and provides automatic failover. Unlike traditional failover models, Spanner doesn’t failover to a secondary cluster but can elect an available read-write replica as the new leader.

High availability of reads vs writes

In traditional relational databases (e.g. MySQL or PostgreSQL), scaling and providing higher availability to reads is easier than writes. Read-only replicas provide a copy of the data read-only transactions can retrieve from. Data is replicated to the read-only replicas from a read-write master either synchronously or asynchronously.

In synchronous models, master synchronously writes to the read replicas at each write. Even though this model ensures that read-only replicas always have the latest data, it makes the writes quite expensive (and causes availability issues for writes) because the master has to write to all available replicas before it returns.

Horizontally scaling reads by adding more read replicas is only part of the problem. Scaling writes is a harder problem. Having more than one master is introducing additional problems. If a master is having outage, other(s) can keep serving writes without users experiencing downtime. This model requires replication of writes among masters. Similar to read replication, multi-master replication can be implemented asynchronously or synchronously. If implemented synchronously, it often means less availability of writes because a write should replicate in all masters and they should be all available before it can succeed. As a tradeoff, multi-master replication is often implemented with asynchronous replication but it negatively impacts the overall system by introducing:

Due to the complexity and the failure modes multi-master replication introduces, it’s not a commonly preferred way of providing high availability in practice.

As an alternative, high-availability clusters are a more popular choice. In this model, you’d have an entire cluster that can take over when the primary master goes down. Today, cloud providers implement this model to provide high availability features for their managed traditional relational database products.

Spanner doesn’t use high availability clusters but approaches to the problem from a different angle. A Spanner cluster* contains multiple read-write, may contain some read-only and some witness replicas.

Read-only and witness replicas are only used for multi-regional Spanner clusters that can span across multiple geographical regions. Single region clusters only use read-write replicas. Each replica lives in a different zone in the region to avoid single point of failure due to zonal outages. 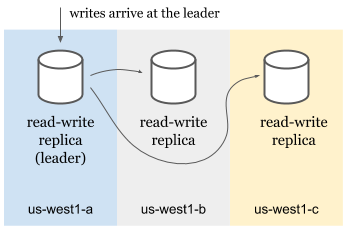 Spanner’s replication and sharding capabilities come from its splits. Spanner splits data to replicate and distribute them among the replicas. Split happens automatically when Spanner detects high read or high write load among the records. Each split is replicated and has a leader replica.

When a write arrives, Spanner finds the split the row is in. Then, we look for the leader of that split and route the write to the leader. This is true even in multi-region setups where user is geographically closer to another non-leader read-write replica. In the case of an outage of the leader, an available read-write replica is elected as the leader and user’s write is served from there.

As mentioned above, synchronous replication is hard and impacts the availability of the writes negatively. On the other hand when replication happens asynchronously, they cause inconsistencies, conflicts and sometimes data loss. For example, when a master becomes unavailable due to a networking issue, it may still have committed changes but might have not delivered them to the secondary master. If the secondary master updates the same records after a failover, data loss can happen or conflict resolution may be required. PostgreSQL provides a variety of replication models with different tradeoffs. The tradeoffs summary below can give you a very high level idea of how many different concerns to worry about when designing replication models. A summary of various PostgreSQL replication models and their tradeoffs: 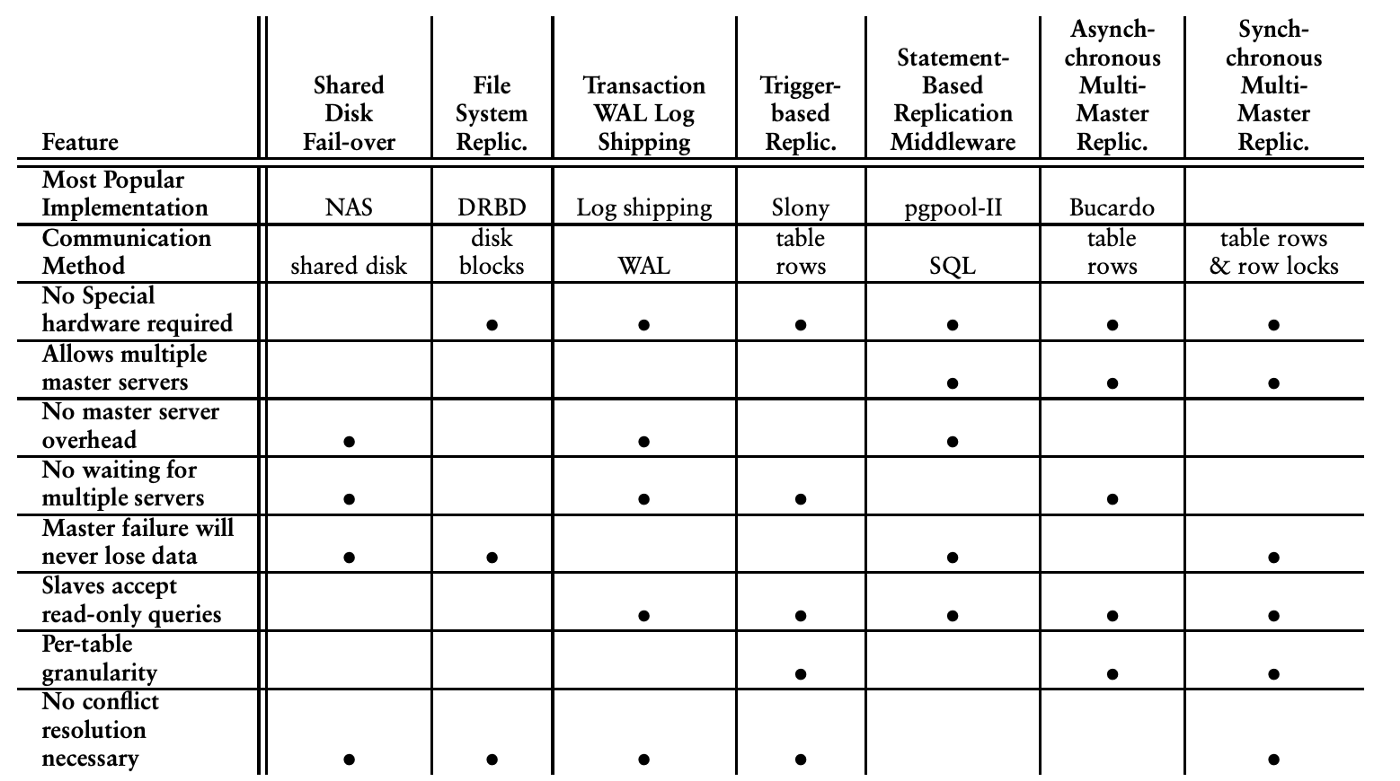 Spanner’s replication is synchronous. Leaders have to synchronously communicate with other read/write replicas about the change and confirm it in order for a write to succeed.

While writes only affecting a single split uses a simpler and faster protocol, if two or more splits are required for a write transaction, two-phase commit (2PC) is executed. 2PC is infamously known as “the anti-availability protocol” because it requires participation from all the replicas and any replica can be a single point of failure. Spanner still serves writes even if some of the replicas are unavailable, because only a majority of voting replicas are required in order to commit a write.

Spanner is a distributed system and is inherently affected by problems that are impacting distributed systems in general. Networking itself is a factor of outages in distributed systems. On the other hand, Google cites only 7.6% of the Spanner failures were networking related. Spanner’s 99.999% availability is not highly affected from networking outages. This is mostly because it runs on Google’s private network. Years of operational maturity, reserved resources, having control over upgrades and hardware makes networking not a significant source of outages. Eric Brewer’s earlier article explains the role of networking in this case more in detail.

Spanner’s durability guarantees come from Google’s distributed file system, Colossus. Spanner also mitigates some more risk by depending on Colossus. The use of Colossus allows us to have the file storage decoupled from the database service. Spanner is a “shared nothing” architecture and because any server in a cluster can read from Colossus, replicas can recover quickly from whole-machine failures.

Colossus also provides replication and encryption. If a Colossus instance goes down, Spanner can still work on the data via the available Colossus instances. Colossus encrypts data and this is why Spanner provides encryption at rest by default out of the box.

As repeatedly mentioned above, Spanner is a distributed system and is not magic. It experiences more internal aborts and timeouts than traditional databases when writing. A common strategy in distributed systems in order to deal with partial and temporary failures is to retry. Spanner client libraries provide automatic retries for read/write transactions. In the following Go snippet, you see the APIs to create a read-write transaction. The client automatically retries the body if it fails due to aborts or conflicts:

One of the challenges of developing ORM framework support for Google Cloud Spanner was the fact most ORMs didn’t have automatic retries, therefore their APIs didn’t give developers a sense that they shouldn’t maintain any application state in the scope of a transaction. In contrast, Spanner libraries care a lot of retries and make an effort to automatically deliver them without creating extra burden to the user.